In 1994, some ladies at Bridlington Priory decided to make a tapestry depicting the major events in its life. After some discussion, they agreed to use applique panels, and by Christmas 1995, 12 panels, each 5ft by 4ft were almost complete.

John Earnshaw, who was a local historian and artist, and also a Priory parishioner, was given a list of important events in the history of the church, from which he selected the subjects of 10 tapestries. He drew detailed sketches from which panels were made, and the last two panels show the modern church.

After several discussions, final sketches were produced on A2 paper. Each of the 12 sketches was divided into eighths, and these were photocopied with 100% enlargement. The enlarged eighths were assembled, and each whole panel worked into 7.5cm squares, which were transferred to a single full size sheet of paper by copying square by square.

Background fabrics were chosen: the reverse side of khaki green dralon for the panels, and tweed for the border to frame the panels. Black piping was made to outline the panels. The design was transferred with the help of grid lines tacked on to the panel fabric.

The set of tapestries includes over 140 human figures, each built like a doll, then sewn to the backing.

To create the varied applique, the sewing team had to be inventive, resourceful, and imaginative to achieve the desired effects. 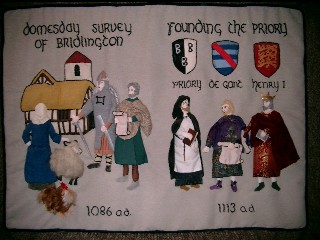 For example, Henry I in panel 1 (above):

One panel was made by a panel of four workers, three were made by cooperating pairs, and eight were made by individual workers.