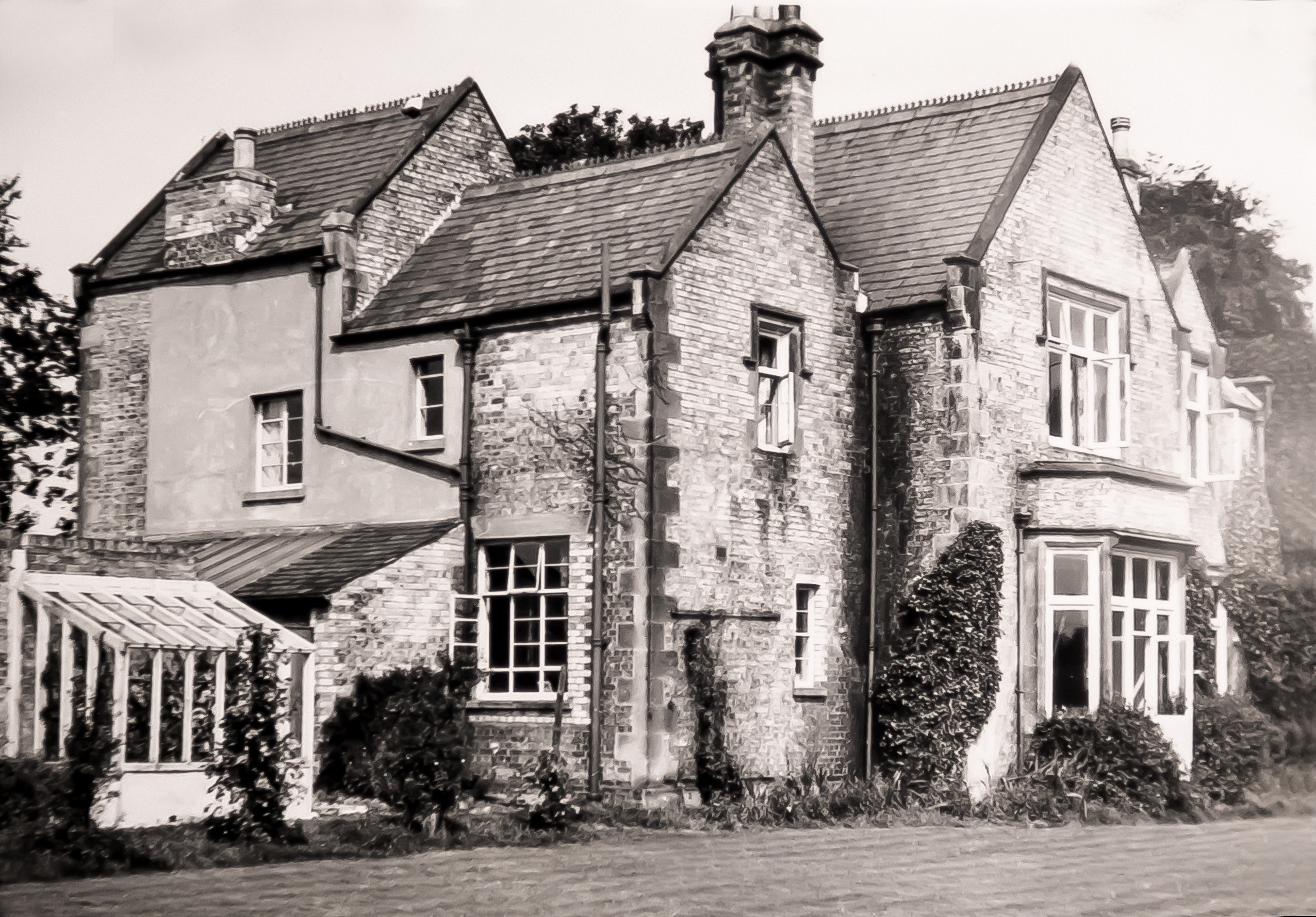 Above: The Old Rectory (photograph by kind permission of Canon Lamb’s grandson).

With thanks to Michael Chaddock for the following text.

In the days of its medieval glory, Bridlington Priory was one of the great monastic houses of England. Its wealth and possessions made it a key monastery in the North, one of the largest and richest of the Augustinian order. The church in those times was more than twice as large as what now remains, rivaling in size other great Yorkshire churches including Beverley Minster and Selby Abbey. The Priory today is a glorious survival of that pre-Reformation splendour, now shorn of its great choir which housed the shrine of St John of Bridlington, its transepts and its stately central tower over which soared a stone crown similar to those above the cathedrals of Newcastle and Edinburgh St Giles.

There was a church in Bridlington at the time of the Domesday survey in 1086, and it is likely that its existing site was chosen for the new foundation by the Priory’s founder Walter de Gant, Lord of the Manor, whose father Gilbert was one of the new aristocracy established in England following the Norman Conquest of 1066. William the Conqueror’s son Henry I was on the throne when the foundation charter was prepared in 1113-14. In it de Gant declared he had established Canons Regular in the church of St Mary at Bridlington “by the authority and consent of King Henry, for his soul and the souls of his father and mother, and the souls of my father and mother, and own soul, and the souls of my friends.”

The Order of Augustinian Canons was new to England, having arrived around 1100, so de Gant’s foundation was amongst the earliest in the country and almost certainly the first in Yorkshire. The Augustinians, or Austin Canons, were priests who formed communities to live the monastic life, but their rule was not quite as strict as that followed by the monks of other orders and in many cases – as at Bridlington – part of the monastic church was set aside for parish worship. The Priory expanded around its church. Its monastic buildings spread out mainly on the south side of the site, including a chapter house, Priory’s hall, cloister, dormitory and infirmary, while to the north were farm buildings. All are vanished today apart from some remains of the cloister. The early years were not without trials, and it is said that the Priory came under siege during the civil wars of King Stephen’s reign. This period, however, was also a time of tremendous expansion in the monastic life of England, and it was Stephen who granted the Priory jurisdiction over the port and harbour of Bridlington. By 1200 the Priory was sufficiently in control of its affairs for King John to grant a licence for the Prior and canons to hold an annual two-day fair and a weekly market. There were problems of discipline, however, uncovered by visitations later in the 13th century. Canons were said to be absent or malingering in the infirmary, while others kept an excess of horses and hounds.

Though poor during its earlier history, the Priory acquired lands in many part of Yorkshire and Lincolnshire and with them came sheep farming on a large scale, the wool trade being the chief source of its growing wealth. This wealth was expressed in stone when early in the 13th century the canons began to build their great new church, work which continued in some measure during the next 300 years and was still incomplete – the two west towers remaining without their upper stages – when Henry VIII shattered the monasteries. The Priory became a centre of literary culture through a succession of scholarly inmates, including its fourth Prior (known as Robert the Scribe), William of Newburgh, the author of a chronicle of English history, and Canon Peter of Langtoft, whose work included a history of England written in French verse. In the 15th century George Ripley, a Canon of Bridlington, achieved international fame as a philosopher and alchemist. The drama of national affairs caught up with Bridlington in 1322 when Edward II, defeated by the Scots at Old Byland, sought refuge in the Priory for a single fraught night before heading off by devious ways to York, the Scots in hot pursuit. Many of the canons, too, briefly migrated with their treasures to the relative safety of Lincolnshire.

The most illustrious of Bridlington’s priors was John of Thwing, who led the Priory from 1362 to his death in 1379 and in 1401 became the last English saint to be created before the Reformation. Born in the nearby Wolds village of Thwing around 1320, he studied at Oxford and returned to Bridlington to become a member of the monastic community and eventually Prior. A deeply devout man “who shrank from all vainglory as from a deadly poison”, John was reported as the source of miracles and healing and the saving of life. After his death the miracles increased, his grave became a place of pilgrimage, resulting in a commission of enquiry and the process leading to his canonisation by Pope Boniface IX. With John’ s elevation to sainthood Bridlington achieved high status nationally. St John’s shrine, an elaborate structure at the east end of the now vanished choir, in a chapel behind the high altar, attracted pilgrims in the same way as that of Thomas Beckett at Canterbury. They included the Lancastrian kings Henry IV and Henry V.

St John is recorded as the special patron of Henry V while Prince of Wales, and the earl of Arundel stated he had visited the shrine with the Prince. Henry returned as king in April 1421. It was a visit marked by personal tragedy, for the king, on progress to both the shrines of the eighth century monk-bishop St John of Beverley and the more recent St John of Bridlington (he had invoked the aid of both for his great victory at Agincourt), learned soon after leaving Beverley that his brother Thomas of Clarence, heir presumptive to the throne, had died in battle in France. The House of Lancaster held Prior John in especially high esteem, for later in the 15th century he was also venerated by Henry VI, who was himself to become a candidate for sainthood. It was this Henry who founded a choir school at the Priory, establishing a choral tradition which continues today in the choir of boys and adults.

The high spiritual status which Bridlington Priory had attained thanks to its new saint was confirmed in 1409 when the Pope conferred on the Prior the privilege of wearing mitre and ring, a dignity shared north of the Trent only by the Benedictine abbots of St Mary’s at York, and Selby. The honour accorded to St John by the Lancastrian kings was confirmed by their successors the Yorkists. Edward IV, in renewing the grant of the church of Scarborough to the Priory, refers to “our great regard for the praise and honour of God, and of the blessed and glorious Virgin Mary, of Bridlington, and for the special respect which we have and bear toward the glorious confessor, the holy John, formerly prior of the aforesaid place.” The prestige attached to the reputation of St John played its part in the construction of the Bayle Gate, today the only substantial survival of the Priory apart from the church itself. This great entry to the Priory precinct was built following a licence issued by Richard II in 1388 to fortify the Priory, though there is little evidence that anything other than the grand but functional gatehouse was built by way of defence.

Under Prior John the Priory attained the height of its medieval sanctity. With its last Prior, William Wood, the monastery’s final annals were written as high tragedy. Wood was caught up in the Pilgrimage of Grace, sparked off in 1536 by the dissolution of the lesser monasteries and the well-founded fear that the greater houses, including Bridlington, would soon suffer a similar fate. Wood was summoned to London, arrested and accused of giving the rebels aid both financially and by the supply of manpower. Part of his defence was that the rebels had said they would cut off his head at his own door if he refused help. Wood was convicted of treason and hanged at Tyburn. After his death the end of the community followed swiftly. The process of dissolution was already in hand as Wood faced trial, and by 1539 the buildings, apart from the nave and the Bayle Gate, were in ruins, the Augustinian canons dispersed, the grand shrine of St John destroyed.

Ironically, it is the report of the destroyers which tells us most about the Priory’s treasures, including the shrine “in a fair chapel on high, having on either side a stair of stone for to go and come by. Underneath the said shrine be five chapels with five altars and small tables of alabaster and images.” The Duke of Norfolk, the first of Henry VIII’s agents charged with the destruction, stood in awe at the size of the Priory’s great barn and reported that he would have stolen three retables from the shrine of St John to send to the Queen “if I durst be a thief”. Thomas Cromwell, the king’s chief minister, told of the people of Bridlington’s desire to keep the church and the shrine, but Cromwell informed Norfolk that they “should not be seduced in the offering of their money” and ordered that the shrine should be dismantled and the jewels and plate sent to London.

From then until the present day the Priory has been the Parish Church of St Mary. It has undergone several restorations, the latest completed in the 1990s, and the work of preservation goes on, with a recent successful appeal to raise £600,000 to restore and rebuild the famous 19th century organ. The major change in the church’s appearance since the Reformation was the construction of the upper parts of the two western towers during a 19th century restoration under Gilbert Scott. The towers were built asymmetrically to reflect the contrasting styles of the west front – the north-west tower in the Early English style and its much higher south-west partner in the more ornate perpendicular style. 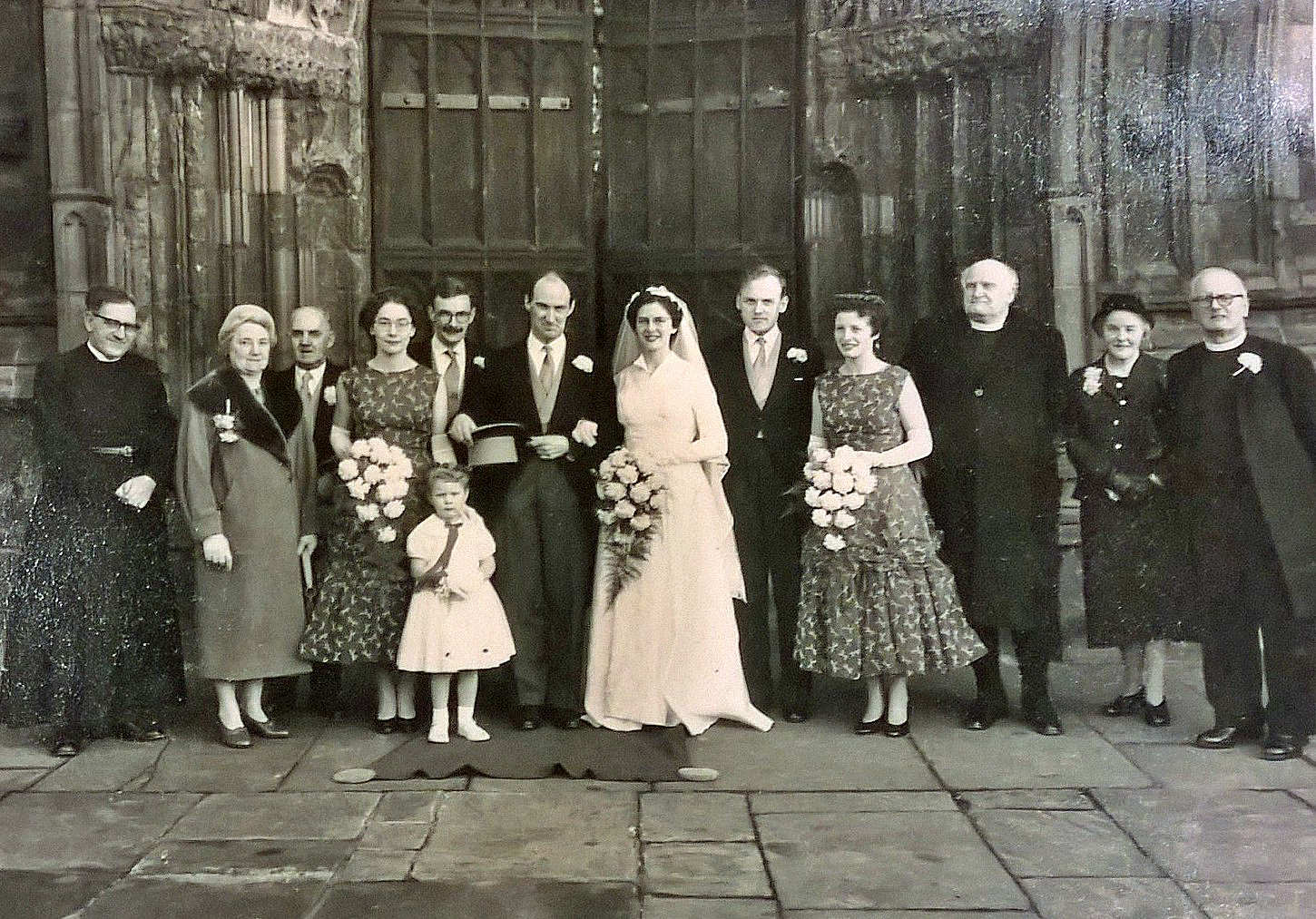 Above: The Wedding of Christine Lamb (daughter of Canon Lamb) and Professor Ronald Whittam FRS, 28th December 1957. The Officiant is The Most Revd. Michael Ramsey, who was then the Archbishop of York. Photograph by kind permission of Canon Lamb’s grandson.