This amazing sculpture can be found in the Priory churchyard and was designed and produced by renowned stone and wood carver, Stephen Carvill, as part of the celebrations marking the Priory’s 900th anniversary in 2013.

‘There is no saint without a past and no sinner without a future’ are words of St Augustine of Hippo, founder of the Augustinian Order. 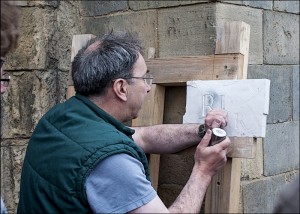 Stephen Carvill is a sculptor, painter and designer who has executed artwork throughout the UK, but specifically in St Paul’s Cathedral, Hereford Cathedral and more recently for the Bomber Command Memorial in Green Park. If you look at large RAF badges flanking the entrance of the building and the lion heads on the sides, you will see his work.

After completing his Art Degree, Steve trained in Stonecarving and was awarded the City and Guilds National Medal for Excellence. He revels in the process of design and making art, he uses a wide range of media and will always look for inspiration to the subject and the materials he is using, feeling for his own way of bringing out the qualities from within.

Due to the Coronavirus pandemic, Bridlington Priory is currently unable to offer its usual range of public acts of worship.

Update (May 2021): The Priory is now open to the public from Monday - Friday (11am - 3pm). The gift shop welcomes visitors, but at this time is unable to provide change for any purchases made.

There is a celebration of the Eucharist every Sunday at 10:30am. This service is also streamed live on the Friends of Bridlington Priory Church Facebook page.